Concussions are one of the more dangerous, if not the most dangerous injury one can suffer.

The reasons why are;

A) Concussions can happen with a slight head whip to smashing your head into something. Both can cause it, whether the impact is light or severe…

B) Once you’ve had a concussion, you are prone to other concussions. Does not usually matter the length between one and the other…but the closer they are together the harder it is to recover.

C) Symptoms may not appear right away. It can take hours or days, so it may become complicated determining when and how it happened.

Now, for those who have explored my website probably came across the concussion section. If you have, you know that I have a history of concussions.

Being a very clumsy child I likely suffered from at least one or two concussions.

But my major concussion history started in 2014. In a five month span (July-November), I suffered from 3 concussions.

(I will give a brief summary, but you can read it in full under the concussion post).

July 2014: Conccusion number 1 happened. I fell on the ice on a jump landing and hit my head. I was wearing a hair clip that broke. Without it, I would have probably been a lot worse off. I continued skating after the fall (supervised by a coach). There were no major symptoms except being unfocused and slightly dizzy.

September 2014: NHL preseason. I was on my way to cover a game. Before going to the Bell Centre, I decided to stop for coffee. While I was at the red light (IN A PARKING LOT)  a car rammed into the back of my car, causing me to whip my head forward. My neck and back were sore, but not enough to be worried. I think it was just the initial shock from getting hit. However, several hours later during the game…I became nauseous, dizzy and unfocused and got a severe migraine. (Car after the hit)

November 2014: Was concussion number 3 -in the 5 month span. This happened 7 weeks after the car accident. I don’t fully remember what happened. I remember going into a jump full speed and on the turn my blade hit a rut and I went down hard. After, I had trouble focusing. I got to the boards and sat there for about 15 minutes. Then I stood on the ice and I had no idea the distance between me and other skaters, I was dizzy and exhausted.

I got off the ice and went to talk with a trainer that was at the rink and was automatically diagnosed with a concussion. I laid on the bench for over 40 minutes trying not to fall asleep. Once I got my energy back (still suffering from symptoms)- I went home.

That night I was supervised and I set my alarm for every hour to make sure I would be able to wake up.

Symptoms of a concussion according to Mayo Clinic;

– Temporary loss of consciousness (not everyone)

Here’s a chart to help determine if concussion is present/Severity of it. Please don’t use this as a diagnosis and if you think you have one see someone asap. 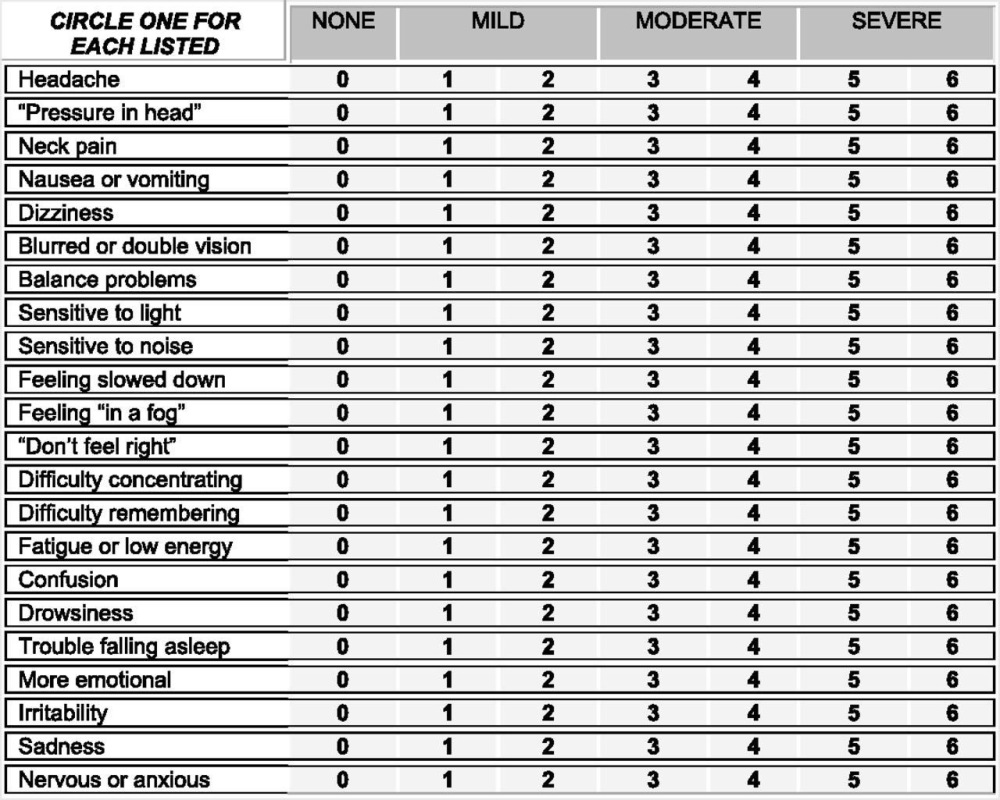 Now lately, very few of you know …I have been suffering from concussion symptoms. Some doctors say it’s because when I fall on the ice the symptoms get triggered (as in a mild concussion)…while others say it is post-concussion syndrome.

Post-Concussion Syndrome is basically symptoms from a concussion that lasts longer than the expected time period.

Concussions can last anywhere for a few days, to weeks, to months.

Right now I am getting severe headaches. Mostly after 20 minutes of studying or focusing. Driving too becomes rough and usually 15 minutes in I need to wear glasses to ease the pain. I get nauseous and I over sleep. Tylonel tends to help and sleep but other then that it gets hard to explain when nobody understands.

I have registered to be a Guinea Pig, and work with ridding the post concussion symptoms. The specialist will be retraining my brain and making me stronger. When I understand the program more I will give a better update.