What a week this has been. So many ups and downs…especially with a double routine competition in sight.

Monday was fine. I felt a bit run down, but come on midterms, competitions, essays, exams etc… I was just a stress ball. I was also up until 2 am studying for a health science exam due Tuesday morning.

Tuesday came around. I was still not feeling 100% and it was the day of exam hell. My first exam was the health one that I was studying for all the night before. The second one was a coaching exam…that I desperately needed to pass.

After the first exam I was dead. I could barely converse normally no mind function. However between finishing school and the coaching test I did some running around including a 1 ish hour drive.

The coaching test went smoothly. I passed and was finally off for the night to get some things done, but again I was up until 2 am.

Wednesday I was up at ass o’clock. Right from the start of my day I knew something was wrong. I was having trouble breathing and was really short of breath.

Throughout the day it was getting worse. It came to a major coughing fit because of it. And eventually I had two of my closest friends telling me I needed a hospital. One of the two, actually making sure I got there.

We got there around 8:30 pm… were seen by triage, admitted, seen by a doctor and released by 1am.

My breathing was progressively worse. And it got to a point I had to take my friends pump for asthma. And once I did it was almost like a miracle. I was starting to breathe again.

The doctor didn’t do many tests this night. They listened to me breathe, and since my friends pump worked they automatically assumed it was asthma.

They prescribed me a pump (blue one) and told me to come back if it gets worse.

Friday was competition number 1. I was stressed. Throughout the day I probably had to pee 900x due to stress.

Then competition time came around. Right before I was going on I was having trouble breathing. My coach made me take a shot from the pump (and I stupidly blocked with my tongue and froze it).

After the program I was having a bit of trouble breathing and I took it again. But also my body was collapsing. I was getting dizzy, heart palpitations, exhausted, dehydrated etc.

However…the skate was disappointing. I got first place but I was also furious with the points. I even wrote to my coach that the theme will be switching ASAP (for the following competition a week after). 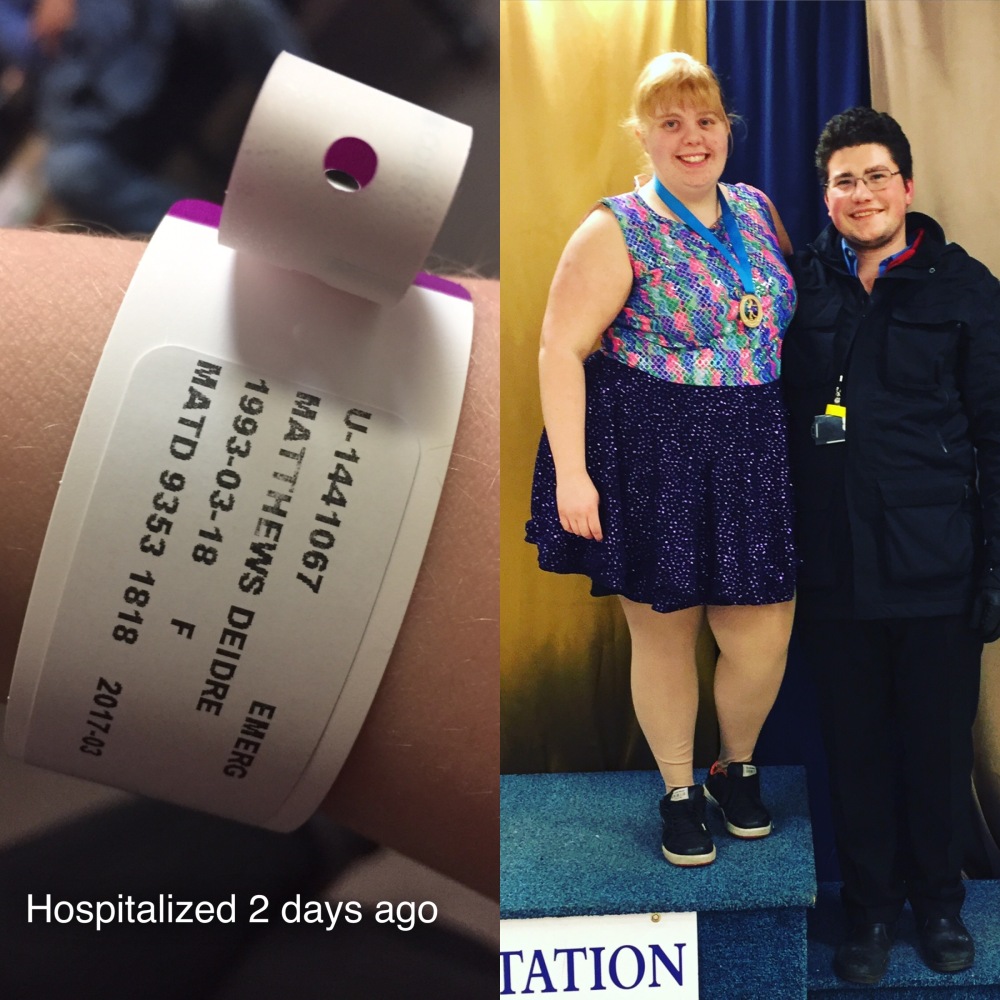 Following day, Saturday…I woke up with chest pains. I went on with my day and got to the competition. I was not overly tired or stressed and I was ready. Except fibro was affecting my body. And I had to downgrade all my elements to have a clean program VS not being able to land cause of a flareup.

During my warmup I was having trouble breathing. I took a shot right as my name was being called.

I don’t remember much from the skate. I remember right around the mid-way point I was ready to collapse. I couldn’t breathe. I was dead tired and I was just throwing myself into the jumps.

Somehow I managed to finish and get off the ice. I sat down on the bench and my chest was pounding, I couldn’t talk or breathe and people were talking to me but I was not understanding anyone.

I took the pump and it calmed down slightly. I was helped down the stairs and into the dressing room. From there I was having a coughing fit. My lungs were tightening and I was burning up.

I took another shot of the pump. Again, still not able to breathe. From there I was able to start talking a bit but I was still choking on every second word. Got to the point I was wanting to puke my guts out and pass out all together.

I took a third shot and eventually I was able to breathe enough to talk. But the sharp pains in my chest were still there and I kept coughing.

This calmed down after 2 hours but was still heavy. However, this program I reached 15.25 points which has been my personal best by just under 6 points. And all my elements except for one was clean.

And a gold medal it was… The following day I woke up. Extremely sore. I could barely breathe again and I had to take the pump several times.

I went out for breakfast with my best friend and over breakfast it was getting worse and more painful.

It got to a point we decided it’d be best to go to the hospital and be on the safe side. We packed up and ended back at the same hospital from days earlier.

We went through triage. I was placed as high priority (since it is breathing). We sat in the waiting room after I was admitted for maybe 1.5 hours before they called me the first time.

The first time was to do a urine test to be on the safe side and make sure I was not pregnant.

… when I saw the doctor right after, I did a bit of a physical test and was sent for an X-ray…which explained the urine test after doctor asked me several times if I thought I needed to verify not being pregnant.

We were sent to imaging that took maybe 30 mins all together (waiting and going in). Then we went back to the waiting room and about 10 mins later I was sent into a room to wait for the doctor.

I went from needing the blue pump, to being prescribed the orange one and inducing pills to jump start the treatment.

Then we were sent home.

I haven’t started the cortisone pump yet. But I’ve started the pills and so far it’s working pretty well.

Anyways on to the next competition…in a handful of days…